Thanks for all the port groups!

VMware ESX virtual machine networking is pretty straightforward.  A virtual switch (vSwitch) is created on each host by default and is associated with one or more physical NICs.  When multiple physical NICs are used, virtual machines benefit from added redundancy and load balancing by simply connecting to such a vSwitch.

VM administrators do not necessarily know or care about VLAN or security settings, so this model abstracts some of the complexity that is a result of this network configuration flexibility.  Here is what a vSwitch with two port groups and two physical NICs looks like:

Unfortunately, if you use Microsoft System Center Virtual Machine Manager (SCVMM) to configure your VMware ESX virtual machines, you are only offered vSwitches in the configuration interfaces, not port groups: 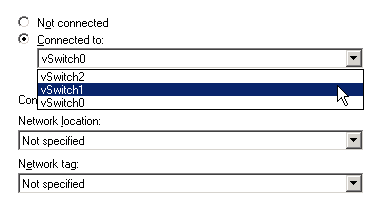 When creating a new VM, or modifying an existing  one, SCVMM simply introduces new port groups on the fly into your environment.  Well, that’s one way to avoid having to figure out which existing port group to use, but it might have been better if the SCVMM interface actually presented the correct objects in the first place.

After making such a configuration change, the VM is then connected to a cryptically-named network like this:

And new port groups are added to the vSwitches on all ESX hosts, something the virtual network administrator might not appreciate: 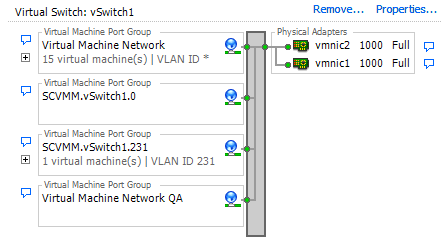 Are you thinking about managing VMware ESX with SCVMM?  Are you also the virtual network administrator?  If not, you may have some explaining to do.

This entry was posted in Virtualizationism and tagged ESX, networking, SCVMM, VI Client. Bookmark the permalink.

5 Responses to Thanks for all the port groups!