Yesterday I was sifting through my email and noticed a little promo blurb to an article written about the VMware vCenter on Linux technical preview: 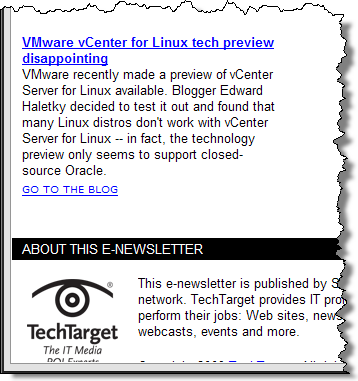 That teaser was clearly written by someone unfamiliar enough with Linux and databases to confuse the two.  Hint: vCenter for Linux is a VM appliance — the distro is irrelevant — and referring to a database as a Linux distro is just plain incorrect.

Linux is not Finnish for “free”

It is critical to point out that “Linux” does not necessarily mean “free.”  Just because an ISV provides a product that runs on the Linux platform does not imply the product is open source.  There is more to Linux than LAMP, and while administering Oracle is not for the uninitiated, you don’t typically hear folks denigrating it as closed-source.

The install guide clearly states that the technical preview of vCenter on Linux requires Oracle 10 or later.  Writing an article about how disappointing it was to use a product in an unintended way — with MySQL — is puzzling.

Software providers need feedback from vocal customers — it benefits everyone.  Check out the comments made by several VMware customers in my vCenter on Linux post.  The sentiment is the same.  There is nothing wrong with asking for — or demanding — support for another database platform.   But trying to port it alone and screaming from a bully pulpit when it doesn’t work… that just doesn’t make sense.

Personally, I hope VMware can support an open-source database for vCenter, too.  Being able to deliver a ready-to-run appliance solution would be a great benefit.

This entry was posted in Virtualizationism and tagged Linux, Oracle, vCenter. Bookmark the permalink.