If VMware ESXi 4 is so small, why is it so big?

Everything you ever wanted to know about the VMware ESXi footprint.

The flagship hypervisor from VMware actually comes in two different form-factors: classic VMware ESX with a Linux-based management console and thin VMware ESXi that can boot from a small embedded flash drive.  Even though ESXi is available for free, it is functionally equivalent to classic ESX when fully licensed and managed by vCenter Server.

VMware ESX 3i, as it was originally known in the VI3 era, was just a tiny 32MB.  With VMware vSphere 4, the name changed slightly to VMware ESXi 4, and grew to about 60MB — still extremely small for a fully-functional hypervisor with HA, VMotion, DRS, and all the other vSphere features.

While ESXi is less than 60MB, installing it actually requires a 1GB flash device.  This raises a question:

VMware claims that ESXi is small — why does it require so much storage?

Unlike a general purpose operating system, ESXi was designed to be deployed as an image — similar to a router.  The “installer” merely paves your empty storage device with some partitions.  In fact, there are two separate partitions created for ESXi images — this allows administrators to roll back to a known-working environment if an update is not successful.  In order to be prepared for the future, these two partitions are several times larger than the data they contain.

Not only does a 1GB flash device contain the ESXi hypervisor, it also provides VMware Tools for various supported operating systems and a copy of the vSphere Client which administrators can download and install to their workstations.  These components are not executed by the hypervisor at all — they can be obtained through other means, but it is very convenient to have them right on the host.

Take a look at this visual to better understand the partition layout: 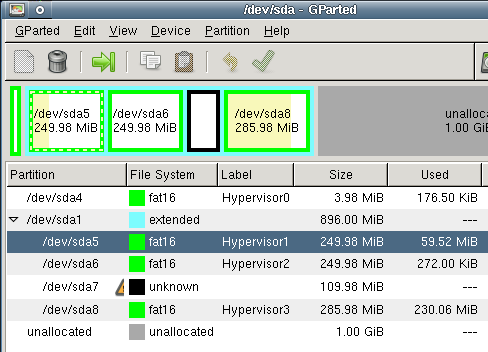 In case you are curious, here are the contents of that last partition: 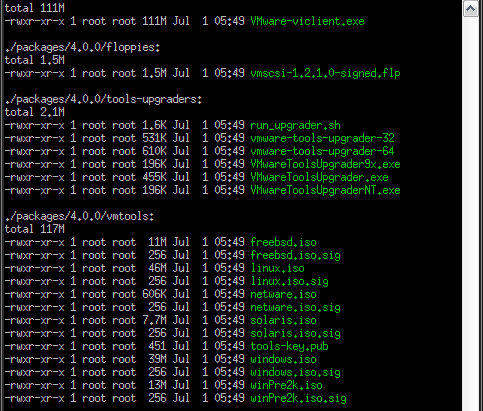 As you can see, it contains a bunch of Windows executables and ISO images for your various guests.

Some may still doubt the VMware ESXi 4 60MB footprint claim, but one sure way to make the case is to simply run ESXi from a very small flash drive.  Olivier Cremel, the inventor of VMware ESXi, explained to me how to do just that. In my next post on this topic I’ll walk you through it, step by step.  Don’t miss out — subscribe to the VCritical RSS feed today!