In my previous post on VMware vSphere thin provisioning, I pointed out the new datastore alarm feature.  You can take advantage of this feature to respond to a sudden storage demand and automatically take action before end users notice.

When triggered, vCenter Server alarm actions allow several options, including the ability to run an arbitrary command such as a VMware PowerCLI PowerShell script.  Please see Carter Shanklin’s in-depth article for more details on how this works — note that he uses a different technique to launch the scripts.

Storage VMotion to the Rescue

When a datastore is about to run out of space, the fastest resolution may be to simply migrate virtual disks to another datastore.   VMware Storage VMotion provides that capability with zero downtime for VMs and no disruption to end users.  Fortunately, PowerCLI can perform this feat with ease, thanks to the Move-VM cmdlet.

This script is a proof-of-concept that is not ready for your production environment as it is — it just picks an arbitrary VM from the nearly-full datastore, finds another datastore with at least 50GB free, and moves the VM disks. More comprehensive selection logic and error checking are needed for a critical task like this.

Save your script on the vCenter Server system somewhere, such as C:\scripts\datastore.ps1.

Create a new alarm at an appropriate level in the vCenter hierarchy, such as a datacenter, and configure like this: 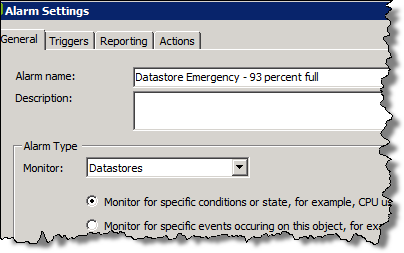 On the Triggers tab, add a “Datastore Disk Usage (%)” trigger to alert at a reasonable percentage — I opted for 93.

For whatever reason, PowerShell.exe does not do well when launched directly by another process — it tends to hang instead of exiting when it is finished.  As a workaround, it can be launched from cmd.exe as long as it receives something on standard input.  To do all that, the necessary code looks like this:

For an alternate approach, take a look at the intermediate batch file solution described by Carter Shanklin in the link above.

On the Actions tab, add a “Run a command” action and supply the appropriate command.  You also need to decide whether to run one time or repeat the action. 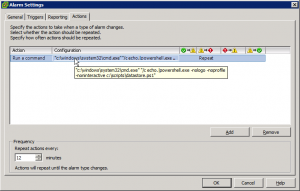 To test the alarm, either fill up the datastore or temporarily lower the alarm threshold.  When the alarm fires, a Storage VMotion should be seen in the vSphere Client:

Note the “Initiated by” column — that’s the machine account for this vCenter Server.  The PowerCLI script is kicked off from vpxd.exe, which is running as LocalSystem.

Additional information is available by looking at the Tasks & Events tab for the datastore.  Here you can see a sample sequence of events, newest on top: 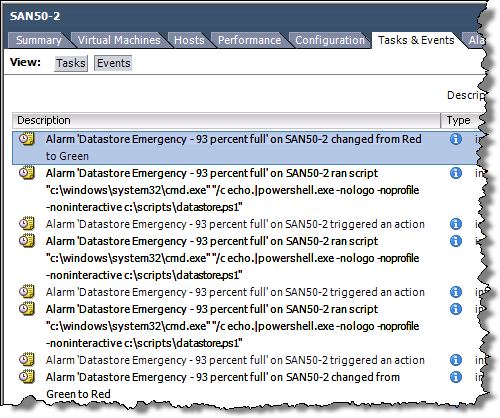 This automated Storage VMotion recovery alarm is a safety valve that could help you avoid suddenly running out of space on a datastore.  It should not take the place of more proactive storage management, but it sure beats VM downtime.

In case you are wondering: No, you can’t do the same thing with Hyper-V because Hyper-V does not have zero-downtime Storage VMotion.  Just another reason to choose VMware vSphere — as if you needed another reason.

Have you used vCenter alarms to automate any recovery processes in your environment?