A cost-saving feature introduced in VMware vSphere 4 is fully supported thin-provisioned virtual disks. Thin-provisioning decreases demand for SAN storage space by permitting virtual disks to consume just the space they actually use — and grow as needed — instead of pre-allocating all space up front.

What’s new is not necessarily the technology — it’s the management.  In fact, veteran VMware ESX admins have been creating thin provisioned virtual disks for years — for controlled scenarios — by way of the vmkfstools command.

Before vSphere and ESX 4, however, thin disks came with risk — there was no simple way of accounting for the overcommitted storage on each LUN.  Even with multiple gigabytes of free space, a small gang of thin-provisioned virtual machines could quickly quickly grow to exceed datastore capacity during a sudden demand spike.

Now in vSphere 4 there is a new element in the capacity section of the datastore summary tab that shows total provisioned space — the maximum potential growth of all virtual machines if thin provisioned disks were fully utilized:

Virtual machines with snapshots have the potential of consuming even more datastore space, so vSphere accounts for this condition, too.  Take a look at this VM Summary tab, where the total provisioned storage includes: 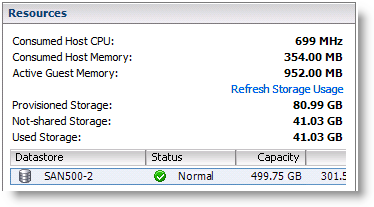 As you can see, a VM with a 40GB virtual disk can actually consume up to 81GB of space on your SAN because of a forgotten snapshot!  Use the  snapshot alarm to stay in control.  And don’t forget that VMware vSphere snapshots are perfectly suitable for production.

New alarms in vSphere prevent out-of-space surprises.  Administrators can monitor not only the free space on a datastore, but also the percentage overallocated — making it easy to adhere to policies concerning thin provisioning aggressiveness in your environment.

When creating a new VM, opting for thin-provisioned disks is as easy as checking a box.  If you change your mind later, you don’t have to start over — during a Storage VMotion operation, administrators can opt to change the VM disk format on the fly (see below).  It is also possible to inflate thin disks into thick via a new menu in the Datastore Browser. 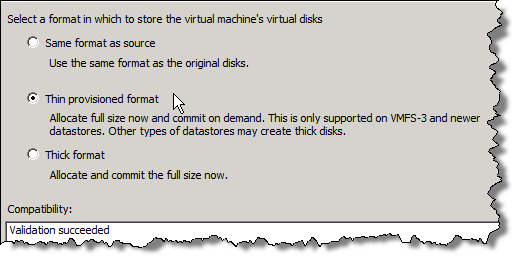 That goes double for thin-provisioned virtual disks.  Without comprehensive accounting and monitoring in place, your virtual infrastructure may be heading for disaster.  This level of insight is only available with VMware vSphere 4 — and it’s built right into the platform.

What about Microsoft virtualization?  Hyper-V R2 thin provisioning — known as “dynamic disks” — is not a best practice.  Perhaps due to the lack of accounting and monitoring of storage overcommitment — especially critical now with Cluster Shared Volumes and multiple VMs per LUN.

Are you using vSphere thin provisioning?