Layers and Layers of FUD

Unbelievable.  That old tale about VMware adding an extra layer is still being told in the Microsoft Virtualization Comparison Brochure.  [Update: The document was pulled by Microsoft and slightly modified as a result of this article.] Pretty surprising, and not at all honest — using the term layer implies a particular order or hierarchy, not merely quantity.  And what on earth is the virtualization layer doing on top of applications? 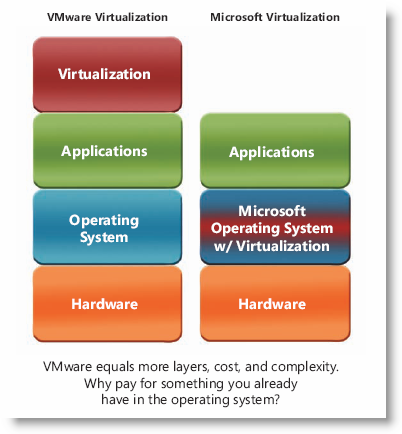 I took the liberty of making some corrections to the Microsoft collateral and am pleased to present three more appropriate ways to depict these virtualization layers.

Truth be told, both virtualization platforms have approximately the same high-level depiction of layers: 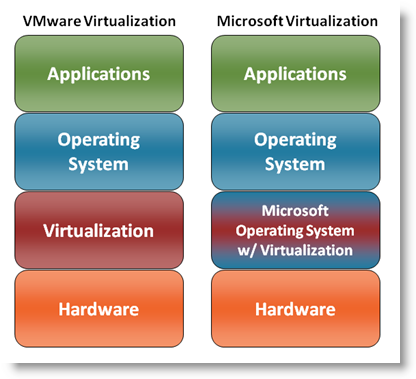 Nothing surprising there — that is how any truly technical content would describe the arrangement.  Notice that virtualization is actually not above the application layer.

VMware ESX and Microsoft Hyper-V both function as a hypervisor, but it turns out that since ESX has a much smaller footprint, one might envision the stack of colored boxes more like this: 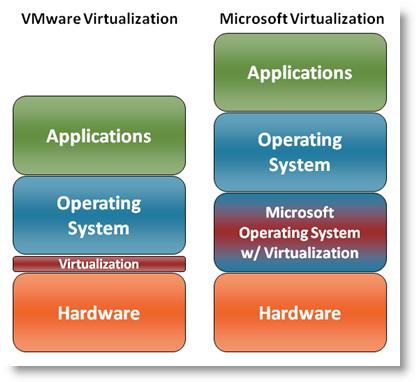 Is virtualization more like hardware or more like software?  If I had to choose, I would pick hardware.  Perhaps those are the two layers that should be combined, like this: 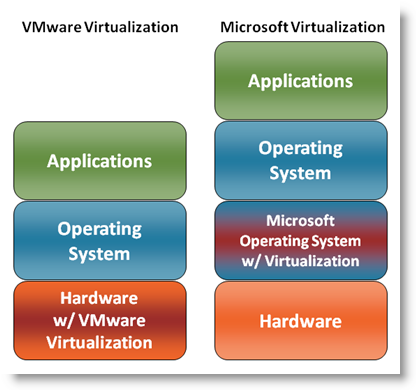 As long as the hypervisor is not tied to a general-purpose operating system, this makes good sense.  However, since Hyper-V is merely a role in Windows Server, it would be a real stretch to picture the same combination for Microsoft virtualization.  Now that I’ve reasoned it through, maybe three layers isn’t so bad after all.

This entry was posted in Virtualizationism and tagged ESX, ESXi, Hyper-V. Bookmark the permalink.

40 Responses to Layers and Layers of FUD