HP has incorporated an interesting option for running VMware ESXi 4 from flash.  Instead of using a USB stick, an SD card can simply be popped in the embedded reader.  While any SD card would work, HP emphasizes that only a specific model is fully supported — the ones I received are actually made by Lexar and the official nomenclature is: HP 4GB SD Flash Media, Part Number 580387-B21.

In my HP BladeSystem c7000 enclosure with BL460 G6 (Nehalem) blades, the SD slot is easily exposed by sliding each blade out of the chassis: 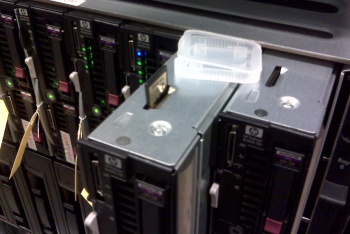 Once the SD flash card is in place, it is trivial to install VMware ESXi: 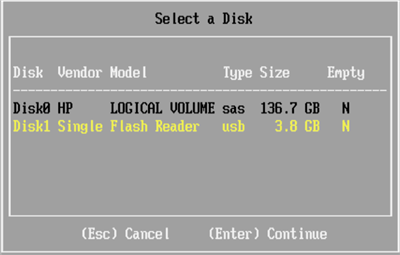 You may also be interested in articles from Rick Scherer and TechHead on this topic.

Sure, Hyper-V Server — but not Windows Server 2008 with Hyper-V — supports boot-from-flash when purchased from a server OEM, but to the best of my knowledge there are no vendors shipping such configurations at this time.  Note that Microsoft recommends a 16GB flash drive for Hyper-V Server deployment (compared to a slender 1GB for ESXi 4), but a PlayStation Portable is an acceptable substitute in a pinch.

Why would you run VMware ESXi from flash?