Hypervisors offer the flexibility to selectively expose a subset of physical CPU features to virtual machines.  The trade-off is broader live migration compatibility at the expense of performance and cutting-edge capabilities.

In a homogeneous VMware ESX cluster, all CPU instructions in the underlying host CPU are exposed to guest operating systems.  VMware vCenter Server also offers the state-of-the-art Enhanced VMotion Compatibility (EVC), allowing administrators to specify a baseline in a mixed cluster that maximizes use of most modern CPU features during transition to newer generation hardware.

CPU-Z is a handy utility that displays comprehensive technical information about a CPU.  Here it is running on a VMware ESX VM powered by an Intel Xeon E5540 “Gainestown” processor — a Nehalem-class CPU with most of  the latest instructions, such as SSE4.1 and SSE4.2: 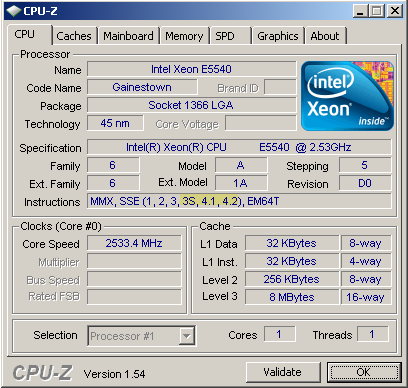 Virtual machines running on VMware ESX are able to take advantage of those features that are designed to improve application performance — giving you your money’s worth after investing in new hardware.

Now let’s take a look at an alternative approach…

You probably know by now that Red Hat has abandoned Xen in favor of the more modern KVM.  So how did the architects behind Red Hat Enterprise Virtualization (RHEV) deal with CPU compatibility across KVM hosts?

They decided not to expose the true underlying CPU details and advanced instruction sets.  Instead, they take a more conservative approach and masquerade as an old Pentium II Celeron CPU — no pesky SSE4 instructions to deal with here: 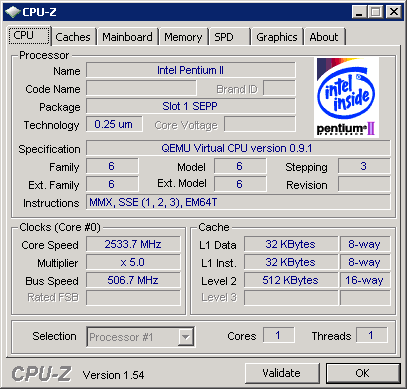 That’s the virtual CPU presented to guests even in a cluster of identical Nehalem hosts!  This is as “good as it gets” for RHEV.

Now, to be fair to KVM — the open source project on which RHEV is based — the capability to expose all physical CPU features is present, it’s just that Red Hat has not designed a suitable management feature such as VMware EVC to take advantage of it.

Red Hat claims that RHEV is just like vSphere, but cheaper (where have we heard that before?).  Is it?

The Hypervisor is not a Commodity

Are you buying new hardware for your virtualization project, paying a premium for hardware with the latest performance capabilities?  Keep in mind that not all hypervisors are created equally.  Only VMware has EVC — and that’s just one of the many reasons why vSphere is the best platform for your Red Hat Enterprise Linux and Microsoft Windows Server workloads.  Why build virtual silos in your datacenter with OS-centric hypervisors rife with compromises?

Get the best, most mature virtualization: VMware vSphere.

This entry was posted in Virtualizationism and tagged ESX, RHEV, VMotion. Bookmark the permalink.