Hyper-Vacating Your Datacenter with vSphere 4.1

Has a rogue Hyper-V host popped up in the server room?  Did someone develop a now-critical application atop Hyper-V on a PC under his desk?  Has your company acquired another that hadn’t standardized on VMware vSphere?  Do you need to get a Hyper-V VM onto vSphere quickly?

Thanks to a new feature in VMware vSphere 4.1 to convert and import virtual machines — also known as V2V — from a Hyper-V host, Hyper-Vacating is now easier than ever.  From the What’s New in vSphere 4.1 document:

It has always been possible to import a Hyper-V VM — even before vSphere 4.1 — by simply treating it as a powered-on physical machine;  this is still a valid approach for those that prefer to do a hot conversion.  The new enhancement in 4.1 allows a cold conversion, which is worth considering to ensure a completely consistent V2V copy.

A cold conversion will require some downtime for the Hyper-V virtual machine.  As a vSphere administrator, you may not be familiar with the nuances of Hyper-V, but the good news is that users serviced by a Hyper-V infrastructure are not unfamiliar with downtime.  That’s because tasks like removing a snapshot require VMs to be powered off.  Therefore, do not be too concerned with this brief outage.

If you have installed vCenter Server with vCenter Converter and plug-in, a wizard will guide you through the entire process.  Take a look at some of the key steps:

Select Hyper-V as the source type: 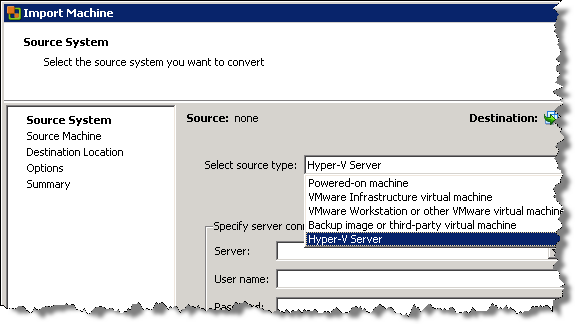 Allow a Converter agent to be installed on the Hyper-V host: 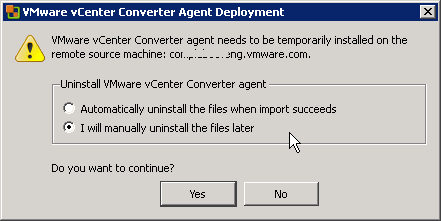 Select a powered-off virtual machine from the listed inventory: 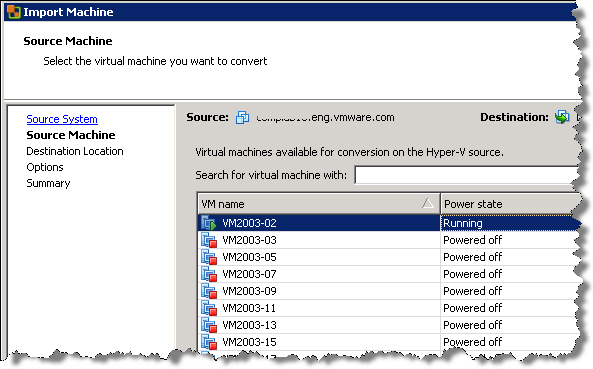 Customize the destination vSphere VM as needed.  You can convert to vSphere thin provisioning and make a number of other modifications, such as disabling the Hyper-V components inside the guest. 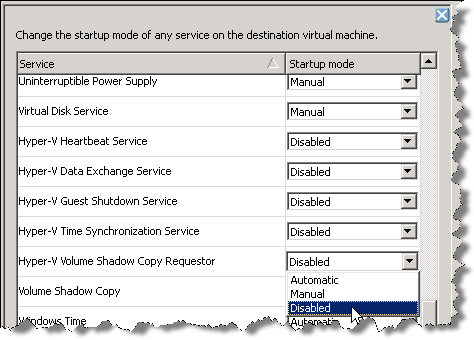 After the process begins, a summary can be found by right-clicking the task in the vSphere Client: 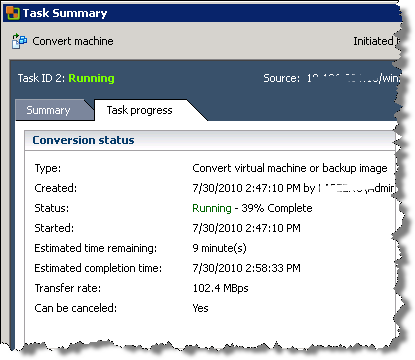 Hopefully, you have already standardized on the best virtualization platform available, but if you find yourself needing to move Hyper-V VMs to vSphere, this new vCenter Converter capability could save the day.

7 Responses to Hyper-Vacating Your Datacenter with vSphere 4.1