A flexible PXE infrastructure can be a real force multiplier in your technology arsenal.  Fully-automated installs are great time-savers, but there is also value in being able to perform an interactive (manual) install of VMware ESXi, Linux, or Windows over the network.  Physical installation media is becoming less and less viable in this day of lights-out datacenters, and virtual media capabilities provided with remote consoles, such as iLO, are best reserved for punishing junior members of the team.  It’s easy enough to have a Linux-based PXE server coexist with Windows Deployment Services — useful for environments that need to deploy various operating systems on a single VLAN.

William Lam is the de-facto authority on fully-automated ESXi deployments, and others have provided recipes for configuring VMware ESXi 4.1 installation media for interactive PXE installation.

The good news is that with VMware ESXi 5 it is no longer necessary to create the image.tgz file to accommodate a manual PXE installation, and another handy enhancement to boot.cfg makes it slightly cleaner to organize multiple installation sources on a PXE/TFTP server.

Take a look at the following procedures to learn more:

On your TFTP server, simply extract the contents of the installation ISO into a new directory.

That’s it.  No need to create any additional files with ESXi 5.

In order to reflect the fact that the installation source is not in the root of the TFTP server, two tweaks are needed.

NEW – Both of the above can be accomplished with the following one-liner in one fell swoop: 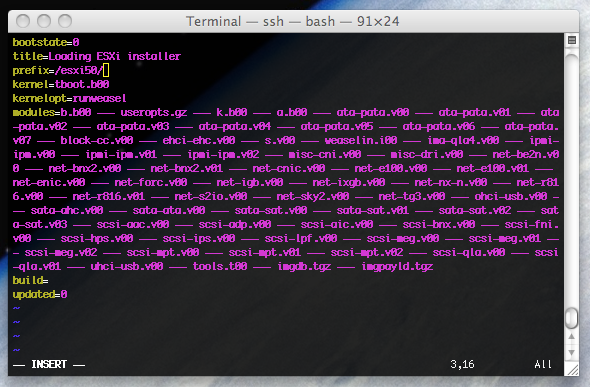 This is much cleaner that repeating the full path dozens of times throughout the file.

Typically the PXE menu is pxelinux.cfg/default; add the following section and you’ll be set:

Now you are ready to boot your physical or virtual machines for an interactive installation of VMware ESXi 5.  It’s very easy to run ESXi 5 inside a VM, now with 64-bit nested guest capabilities!

This entry was posted in Virtualizationism and tagged ESXi, installation, PXE. Bookmark the permalink.