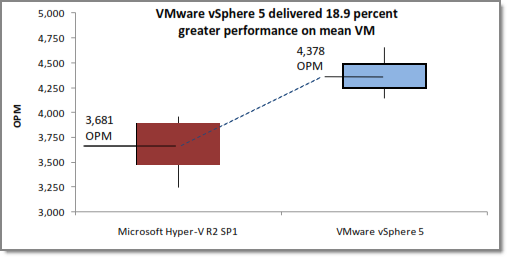 Let’s take a closer look at these three victories.

With the shift to cloud-based, multi-tenant computing environments, it’s more important than ever to be able to guarantee resources to infrastructure consumers.  The advanced resource management capabilities of VMware ESXi continue to shine — delivering 39.2% better standard deviation among virtual machines.  The erratic performance of Hyper-V workloads translates into an inconsistent experience and missed SLAs in densely-virtualized environments.

Thanks in part to the full range of advanced memory management technologies in vSphere, VMware ESXi performance actually increased by 11.2% when more VMs were added to a host.  Hyper-V, with apparently sub-optimal scheduling capabilities — and lack of memory page sharing, compression, and hypervisor swap — did not fare as well; performance dropped by 3.3% in a very reasonable oversubscription scenario.

While Microsoft claims that Dynamic Memory, introduced recently in Service Pack 1, has closed the gap between Hyper-V and vSphere, these independent test results tell a very different story.  Although that new feature does allow Hyper-V to power on more VMs than before, infrastructure architects will need to consider the performance impact on workloads in higher-density private clouds built from the unproven and less mature Windows-based hypervisor.

Please download the full report (or summary) and see why VMware vSphere is the best cloud infrastructure platform.