As it turns out, this Microsoft Cloud wasn’t zoned for optimal utilization — it ended up in a construction site.  Sort of like unsuspecting consumers of the Office 365 service, which is so prominently featured on the sign.  Or, as they say at Azure: Temporary “DNS issue” folks. Nothing to see here. 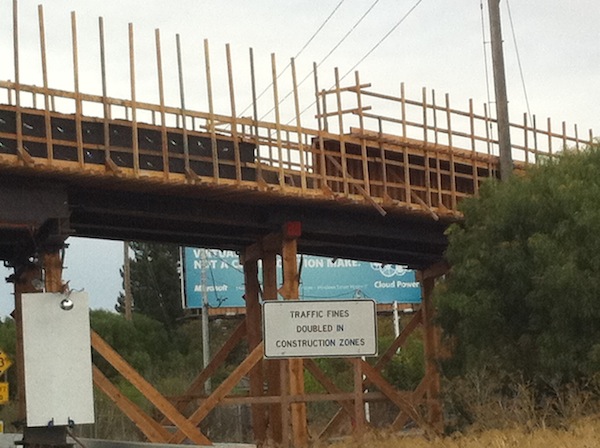 Submit Your Caption for a Chance to Win!

Think of your most clever caption to the photo above and post it below as a comment for a chance to win a copy of VMware Workstation 8 ($199 value).  Hurry, contest ends October 11.

Here are a few examples to get you started:

Want to know the real irony here?  This obstruction is a pedestrian footbridge that will be frequented by Google employees on their commute to one of many buildings in the area.  You can’t make this stuff up.

Rules: Winner selection is subjective.  If similar entries are received, the first submitter will have priority.  Entry must be received by October 11, 2011 11:59 p.m. PDT.  Prize not claimed within five days of notification will be forfeited.  Contestants must be legal residents of earth.  Not sponsored or endorsed by any third-party.

This entry was posted in Virtualizationism and tagged azure, cloud, Microsoft. Bookmark the permalink.