In a new head-to-head comparison published by independent technology assessment firm Principled Technologies, VMware vSphere once again trounces challenger Hyper-V by delivering superior speed, performance, and reliability for zero-downtime virtual machine migrations.  Live VM migration is crucial for proactive maintenance on hypervisor hosts and for distributing workloads as demand shifts — optimizing for either performance or power savings.  Once an exclusive feature of the industry-leading vSphere platform, live migration has become yet another casualty of the checkbox war — where a simple “yes” or “no” cannot sufficiently convey vital technological differences.

Microsoft may position Hyper-V Live Migration as good enough, but a side-by-side comparison clearly reveals that an imitation is never as good as the original.  VMware vMotion continues to improve and vSphere 5 enjoys many new enhancements, including support for multiple 10GbE interfaces to increase bandwidth for migration traffic — complementing the well-proven ability to migrate up to 8 VMs at a time.

Hyper-V Live Migration, introduced two years ago after much delay, will evidently remain stagnant for quite some time to come.  In fact, the shipping version of Hyper-V can still only accommodate a single migration at a time — whether a source or a destination.  This leads to the somewhat disingenuous claim that Hyper-V supports up to 8 concurrent Live Migrations per [16-node] cluster!

Principled Technologies conducted migration testing in two different scenarios, providing objectivity to correct the inaccurate claims of parity between the platforms. In the first scenario, one host in a cluster is running 10 VMs and is put into maintenance mode.  Comparing elapsed times to evacuate each hypervisor quantifies migration speed without conjecture.  In the second scenario, a single busy VM is moved from one host to another.  The elapsed time is considered, but more important is the performance impact to the application undergoing migration.

Take a look at the results and see for yourself:

Under real-world conditions, VMware vMotion is over five times faster than Live Migration.  When Patch Tuesday rolls around and it’s time to update Windows-based hypervisors, be sure to build plenty of margin into the maintenance window to allow for host evacuations.  What’s amazing about this victory is that although vSphere 5 now supports multiple 10GbE NICs for vMotion traffic, this scenario used just a single interface on each host. 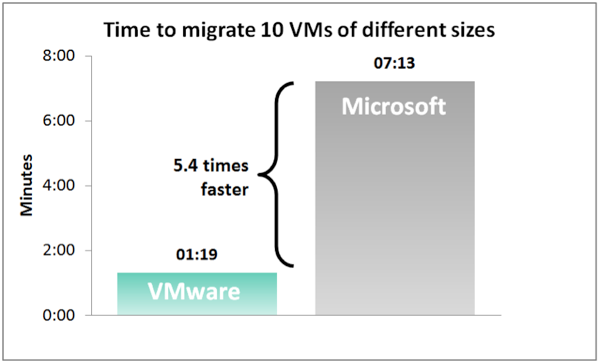 A busy database VM is expected to deliver continuously; minimally impacting application performance during migration is a crucial requirement when demanding SLAs must be met.  VMware vMotion cranks out 63 percent more orders than Hyper-V during a 4-minute migration window. In fact, vSphere needed just half a minute to move a very busy 4-vCPU SQL Server VM with 16GB RAM.  The charts below make it clear: vSphere empowers IT architects to virtualize with confidence. 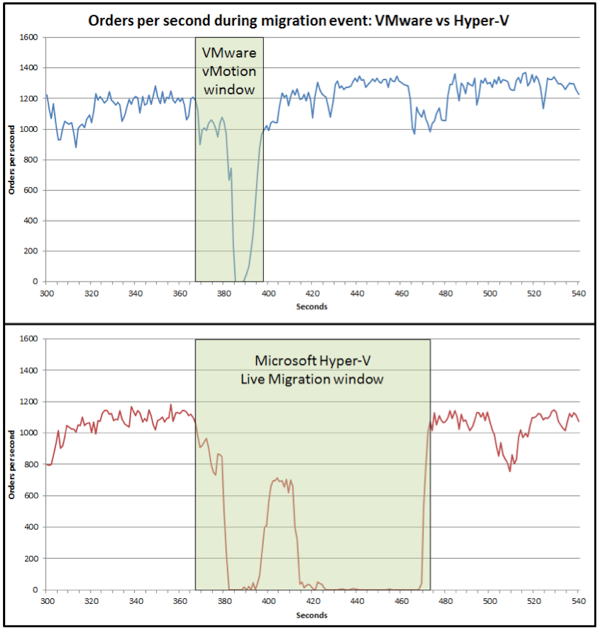 Having the best possible performance is not the only thing that matters — live migration would be of limited use if it caused workloads become unstable or crash.  Therefore, imagine the surprise to learn that Hyper-V VMs fail in a reproducible, albeit unpredictable, way with the dreaded Blue Screen of Death (BSOD) after undergoing Live Migration.  I’m sure this will be eventually resolved through some future Patch Tuesday, but that’s not what consumers of your IT infrastructure want to hear.

Hyper-V: “Missing Something” or “Good Enough”?

Last, but not least, an enthusiastic Hyper-V advocate and long-time VCritical reader once provided this revealing insight:

Thanks to Principled Technologies, we now lay this Microsoft conjecture to rest.

The success of a cloud deployment depends entirely on the foundational infrastructure.  Not only does VMware vSphere provide the best performance density per host, it also offers the best operational management capabilities for your cloud.  Don’t fall for the “good enough” trap!

Be sure to download the full report from Principled Technologies.

This entry was posted in Virtualizationism and tagged Hyper-V, live migration, performance, vSphere. Bookmark the permalink.