After being trounced in the live migration game for many years, Microsoft has finally had enough.  For those not keeping close track of the narrative, it has gone something like this:

But it’s all about to change with the upcoming release of Windows Server 2012.  Soon, Hyper-V administrators will be able to migrate an unlimited number of virtual machines at once.  How’s that for amazing: going from one concurrent live migration in the currently shipping release to infinity — and beyond — in the next!  VMware, limited to a measly 8 concurrent migrations over 10GbE, lags far behind infinity.

A vendor that is confident enough in a platform to declare that it can handle “unlimited” scale might back up such a claim with a commensurate default configuration.  For instance, if VMware vSphere concurrent vMotion maximum is 8 for 10Gb networks, then you would reasonably expect Microsoft Hyper-V 3 to either have no limitations out of the box or at least one that is significantly higher than vSphere, such as 16.

That’s why it’s kind of odd that Hyper-V 3 ships with a default concurrent live migration limit of two: 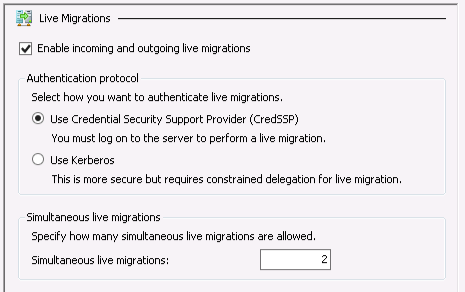 Also note that this appears to be a per-host setting — one should refrain from speculating on what happens if source and destination hosts are configured with different limits. “Abort, Retry, Fail?” does come to mind.

It’s only a matter of time before a well-meaning Hyper-V fanboy puts this unlimited live migration claim to the test, most likely with a huge number of idle, sub-1GB virtual machines — despite the fact that the pre-release Windows license agreement forbids disclosure of any performance testing results.  Whatever the result, unless your datacenter is full of tiny VMs doing absolutely no work, it’s not much of a comparison.

In the end, making claims of  “unlimited” scalability is a sure sign of desperation — even for a multi-billion dollar corporation.

UPDATE: It turns out that someone has already pushed the limits of Hyper-V 3 concurrent live migrations.  Needless to say, the tiny, idle VMs migrated flawlessly and without violating customer SLAs.

This entry was posted in Virtualizationism and tagged Hyper-V, live migration, Microsoft. Bookmark the permalink.