Quickly Update to Docker 1.6 on Photon by using TDNF

Project Photon from VMware is a small-footprint Linux container runtime.  Technology Preview 1, released on April 20, shipped with Docker 1.5 – but with a few simple commands it is easy to update to Docker 1.6.  This is done with the Photon package manager, TDNF.  For those that were not aware, Yum is Dead and being replaced by DNF.  TDNF is a VMware innovation that offers DNF-compatible package management without a massive Python footprint.

All that is needed to move up to the latest Docker is to verify that the Photon repository is accessible, update the docker package, and restart appropriate components.

Photon comes configured with several RPM repositories, one of which is the ISO image that can be handy when Internet connectivity is not available.  However, if your Photon instance does have access to the net, it is more convenient to use the online repositories than to mount an ISO.  Regardless, since the goal here is to get a package that has been updated since the ISO was created, Internet access is required.

Disable the ISO repository with the following command:

After that, update the metadata cache:

First, verify that an updated version of Docker is available:

Then, run the update command:

If everything goes according to plan, this should be the experience:

Photon uses systemd, so use the following commands to restart the docker daemon and complete the update:

Now your Photon instance is on the current Docker release.  Use the hello-world container to verify: 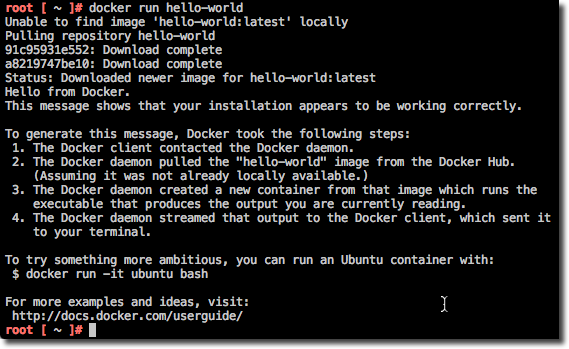 Easy as that. The procedure described above should work for future releases, too.

This entry was posted in Virtualizationism and tagged Docker, Photon, TDNF. Bookmark the permalink.
This website uses cookies to improve your experience. Using this site indicates you are okay with this. Accept
Cookies...